Breakout Investors Focus on Fundamentals and Buy When Others are Fearful

One of my favored expressions is “That which cannot go on forever, won’t.”  So apparently, I’m trying to make some statement regarding what we saw in the market yesterday.  From the S&P down more than 1000 points in the early afternoon, to up almost 100 points at the close. The big questions included: what triggered the fall, who bought the dip, and who got scalped in the morning and was left cursing his screens in the afternoon?

My hypothesis is that it was a correlation of three things (i) the continuing rotation in anticipation of coming Fed rake hikes and tightening; (ii) reaction to  the firming message that Russia is going to do something dramatic in Ukraine, and (iii) cleanup following a very large option expiration date last Friday.  Markets fell like dominoes as they opened across the globe and the U.S. simply fell in line.  So who got spooked and sold? The answer likely is (x) institutional money, including those that acted mechanically to more “risk off” in tandem with the rising VIX, and (y) retail investors that capitulated as pressure mounted through the morning. 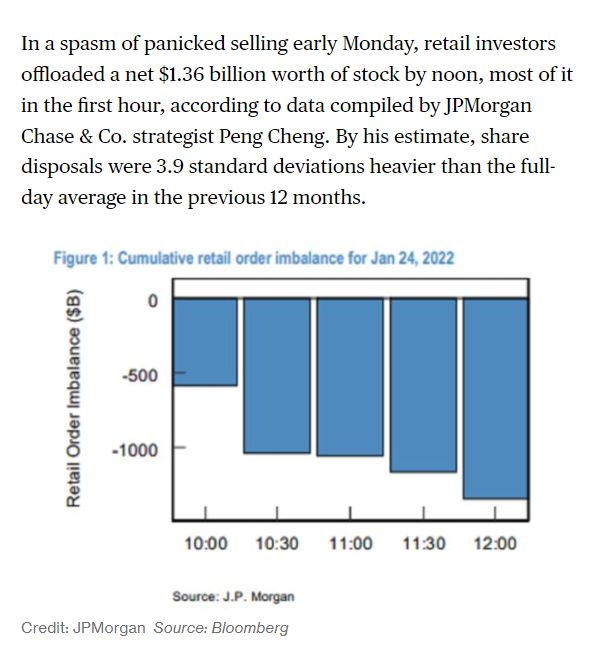 I interpret the first basket of sellers (institutions) as a painless event.  I have a lot of interest in the second basket of sellers (retail).  Older hands like Mark Gomes have been warning for months that the day of reckoning was coming – the day when those who thought the huge returns realized in 2021 proved them to be a trading genius.  Of particular note is that idea that yesterday’s scalping took place immediately following last Friday’s option expiration — folks reeling from option trades closing a $0 on Friday were assaulted in their equity positions on Monday. Yesterday, I thought I saw more than one margin liquidation playing out before me on the Level II screen.

Ultimately, analysis shared on the Breakout Investor Platform  this morning indicates that yesterday was a violent period of the market’s adjustment to higher real rates, requiring extreme valuations be brought down.

Moral of the story is that fundamentals matter.  Companies can trade up to 30x sales in extreme examples.  When you see dozens to hundreds of companies (fast-growing but money-hemorrhaging) names all trading at sky-high valuations at the same time, you are looking at an extreme market.  I’m sure many of the people collaborating on the Breakout Investor Platform lost money yesterday, but indications are that the overwhelming majority were buyers yesterday — adding shares to their favored positions, taking advantage of the expected volatility.  Favorite names include SMSI, VTSI, and TFFP.  Today is a good day to log into the platform to read and learn why we are just as bullish about these names today as we were last week.

Join us on the Breakout Investor Platform (BIP) to discuss small and microcap stocks with catalysts before them while sharing perspectives on an ever changing marketplace.  We seek to to be Ahead of the Curve making money in good markets and bad.  Membership and most of the content on BIP is free.

Download the Breakout Investors app to join the conversation.

It's All About the Network!

Breakout Investors is: Community, Content, and Collaboration. We are a global network of investors eager to share ideas and research as we seek to identify future Breakout Investments.